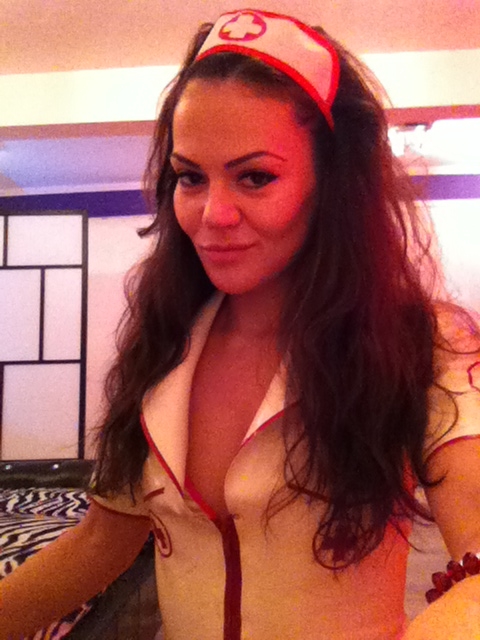 Nurse Dita and the Naughty Patient fantasy – Part I

This is a fantasy created by a client and flawlessly performed by Dita. If you have an interesting story, get in touch!

The Scenario in brief (duration for three hours):

Chapter 1 The Patient knocks on the room’s door and Nurse Dita tells him to enter.

Chapter 2 Nurse Dita asks The Patient why he doesn’t want to participate in gym class and then she tells him to lie down on the bed. She pulls down his shorts and sits on his face without underwear (The Patient won’t do anything while Nurse Dita sits on his face, he will just enjoy this position). She fingers The Patient’s genitals and begins to talk dirty about what she’s going to do to him later. After five minutes she commands him to stand up.

Chapter 4 Nurse Dita turns on the CD-player (she has prepared some music for the scenario) while she wipes The Patient clean and leads him to the bed, where she starts smiling and commands him to lie down on his back with his knees to his stomache. She continuously smiles and talks dirty to him during this procedure. She also pulls on a pair of black socks on his feet and takes out a glass thermometer. Nurse Dita smiles while she shows it to The Patient and tells him that she’s going to take his temperature in his tushy. She puts some gloves on and prepares the thermometer with some lubrication. Then she spreads his buttox with one hand while she slowly slides the glass thermometer into his butt about halfway. After sliding it in, she holds it in place with one hand while gently touching his dick and scrotum with the other hand. After five minutes she pulls out the thermometer and takes a look at it. Something doesn’t look good therefore Dita wants to make sure and takes his temperature again for five minutes. This time he stays over her knees and gets a few spanks with the hand meanwhile.

Chapter 5 The thermometer reveals a slight fever and Dita commands The Patient to turn over and stand on all four on the bed, putting his elbows to the sheets so his butt is up in the air. She changes gloves and goes to the fridge in the hotelroom and takes out a package of suppositories. She takes one out, smiles and shows it to The Patient, telling him that she will insert it in his tushy, in order to cure his fever. She takes a look at his butt to see if any more lubrication is required, and decides to put some lube on her finger. Then she spreads his butt cheeks with the other hand and starts to tickle his butthole with the tip of the suppository. After a few seconds she gently inserts the suppository with the lubed finger. She leads the finger in all the way to make sure the suppository doesn’t come out and while she is inside him with her finger, she also gently rubs his prostate to see if she can find his G-spot. She keeps her finger inside him for a minute and she touches his dick and scrotum during this time while she talks dirty to him. Then she pulls out her finger and changes gloves.

Chapter 6 Nurse Dita commands The Patient to lie on his back again and pull his knees to his stomache, like he did when she took his temperature. She smiles and decides that one suppository wasn’t enough, so she inserts a second one in this other position (this time without lube because there’s already some lube in that area) while she touches his stomach, dick and scrotum. Then she pulls out her finger out of his butt and changes gloves again.

Chapter 7 Nurse Dita commands The Patient to remain in this position (on his back with the knees to his stomach) and she takes out some special wipes and wipes his butt clean from the lube while holding his feet up in the air. Then she takes out another special wipe and wipes his scrotum and dick clean. Then she smiles and powders his butt and scrotum and she pulls out a diaper which she pulls on to him. She continuously talks dirty to him about the temperature taking, suppository insertion, powdering and diapering.

Chapter 8 Nurse Dita removes her gloves and commands The Patient to stand up and walk around in the room with the diaper on. Then she commands him to lie down over her knee and she gives him a gentle but firm spanking for two minutes.