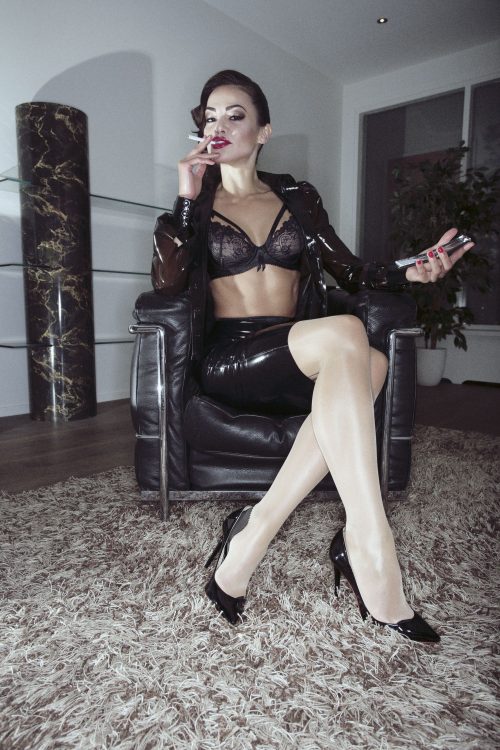 She could not count how many times she went through it: The frustration of another business trip. She wanted him, longing for fun for so long. In a carnal way, in a sloppy way, she wanted to control him that way, to get it him stuck at the doors of ecstasy up until she would decide when to taste his come, and she would get it! All of it. Tonight, she would not wait; she would just go for it and make sure he would never forget.

She enters his room, seemingly for preparing for the next day’s meetings. He is just sitting on the bed. Moving toward him, she straight up puts her high heeled feet on his thigh, exposing the wonderful shape of her legs and clearing the view to her sexy underwear. Surprisingly, he welcomes it without a word. Why did she not do this before? He reaches for her leg, she pushes his hand away. She is in charge.
She steps back, slowly undulating her body, slowly undressing, just keeping her sexy stockings on, teasing him with her beautiful body, pressing her breasts together, fingers running everywhere, exposing her pussy and ass. She would give it all.
He undresses at the same rhythm.

She puts back her foot right in his crotch, slowly massaging him, warming him up. And warm up he does. He kisses her legs, long licks from feet to inner thigh and buttocks. He especially enjoys her feet, her toes. She happily gives them to him. He caresses her body, feeling every curve. Good, he would enjoy far more before this was settled, and she wanted more than caresses.

She orders him to lie on the bed, and stands on top of him, pushing her feet on his cock to make sure he is hard, rubbing her sole on his shaft. Kissing the tip of this member and lubricating it with some saliva, she then plays with it, squeezing it hard between her toes. She is the one driving on this one; tonight she will own his orgasms.

After a few minutes, she lays on him, letting her body slither on his, kissing him deeply. She slowly goes down, and rubbing her tits on his cock. Painting her nipples with the first drops of precum and saliva, then getting back up to let him suck on those.
She then goes down fully and put his member in her mouth. She squeezes his cock hard with one hand and strongly massages the head with her tongue. He is getting hard, really hard.

But she did not go all this way to blow it up so soon. She goes back up his body, the same way she went down. Letting him kiss her breasts and tease her nipples again. Her pussy needs some attention too! And she will give it to him! Squatting on his face, she lets his tongue work around her, inside her. She takes the time to take her own pleasure, letting her juices slowly drip in his mouth.

She turns over and slowly bends down to a 69 position. He is eating her good, she would reciprocate. This time, she goes deeper. His penis slowly passes her lips, then her tongue, then her throat. Spit slowly drips on it. She controls him, backing off when she feels the pressure rising. It is getting sloppy but she wants it sloppy, Precum and spit glistening on his shaft and balls. The controlled rhythms of the deep movements of her mouth on his dick and her hands massaging his balls making him slowly climb to ecstasy.

When she feels he is ready to blow. She tells him to stand, and gets on her knees. She continues to suck on him, then stroke him while playing with his balls in her mouth, squeezing them, sucking them. Her eyes say it all, she wants her first serving. Keeping his penis wet, she strokes him to her open mouth, her tongue playing with the tip. He comes, she doesn’t stop stroking, she sucks harder even as his body is squirming, and playing with him up to the point he is not hard anymore.
She settles slightly on her back and slowly spits the cum and saliva on her chest to show him what a mess he has done. It is dripping toward her stomach. She spreads it all over her tits, stomach and pussy. It feels good. She will want more!

Getting her mind together, she realizes it is time for a shower. All this mess is good but sticky… Also he will need some time to recover. Getting in the shower after having washed off for a few minutes, she sees him still lying on the bed, looking at her in the shower. He will want more too. She invites him to come in.
Feeling him close to her again excites her. Her body reaches out to his. They kiss and hug, her pussy pushing toward his cock; her tits yearning to be handled. Still, it will still take a little time before he is operational again. So be it, she can enjoy herself while getting him ready!

She orders him to come take care of her. He gets on his knees and she put one leg on his shoulder, letting him eat her out, grabbing his head and hair to lead him to what she wants, more juices for him.

She pulls a condom and covers him. She comes on top of him, squats, and slowly let her body down on his cock. Not all in, not too fast. No, she wanted this for too long and she likes the control. First she rubs his cock on her asking pussy then she just let the tip in, then fully backs up, and going each time a little further. She keeps her pussy muscles tightening, reminding him that she is the one who says when, how and how fast. Once fully in, she falls on him for a deep kiss then backs up and starts pushing up and down. She wants her own pleasure but takes care to not bring him over the edge, not yet. She has more in mind.

After some time, she yearns for something more. She gets on all four, showing him her ass, spreading her cheeks; she licks her fingers and slowly puts one in her anus while rubbing her pussy with her other hand. She tells him she would really need more than a finger there. He asks her to lay on her back, ass to the side of the bed, he puts 2 pillows under her to put her at level. He goes in, slowly, by steps, the same way she put him in, and slowly pumps there while massaging her pussy. She squeezes her muscles again, as if she would not let him go. His member pulsates more and more, she can feel it. She is going to get more, as she wanted. And he knows what she wants.

When he is almost reaching its tipping point, he backs off and discards the condom. He slowly climbs on her chest and she squeezes her tits for him to enjoy. They are still slippery with oil. He thrust between her tits and plays with his tip on her hard nipples.
Now is the time. After a while, she grabs him and put him back in her mouth. She pleads for him to let her get some more taste of his come. She will take care of it and pushes him on his back. This time, she goes full on, her head bobbing up and down on his dick, all the way back to her throat. He starts bulging but she will not stop, nor slow down. He has to let go, he has to explode, it is not his choice to make. She feels it bursting but she still does not stop, even if he is squirming in sweet agony, not until she is sure she got it all, to the last drop.